Federated learning is a distributed learning framework that is communication efficient and provides protection over participating users' raw training data. One outstanding challenge of federate learning comes from the users' heterogeneity, and learning from such data may yield biased and unfair models for minority groups. While adversarial learning is commonly used in centralized learning for mitigating bias, there are significant barriers when extending it to the federated framework. In this work, we study these barriers and address them by proposing a novel approach Federated Adversarial DEbiasing (FADE). FADE does not require users' sensitive group information for debiasing and offers users the freedom to opt-out from the adversarial component when privacy or computational costs become a concern. We show that ideally, FADE can attain the same global optimality as the one by the centralized algorithm. We then analyze when its convergence may fail in practice and propose a simple yet effective method to address the problem. Finally, we demonstrate the effectiveness of the proposed framework through extensive empirical studies, including the problem settings of unsupervised domain adaptation and fair learning.

Instead, our method, Federated Adversarial DEbiasing (FADE), does not require users to share their data but only sharing an additional discriminator sub-network. Just like FedAvg3, the shared model help to transfer the useful knowledge in the data while keeping raw data locally.

As shown in Theorem 1.4, it is a sufficient condition for the minimizing the model-measured discrepancy $\tilde D$ between $p_1$ and $p_2$. We also demonstrate the effectiveness by experiments on unsupervised domain adaptation (UDA) benchmarks. The FADE-based achieve performance comparable to central versions. In non-iid and autonomous-user-involving (2 users per round), FADE outperforms the baselines.

We also notice a possible negative impact due to the imbalance of group users. Suppose the ratio of two group users are $\alpha_1$ and $\alpha_2$, respectively. Then the sensed discrepancy will be biased as the imbalance is more severer.

To fix this, we propose re-weight the losses according to the loss scales. That is $\hat \ell = - \ell^2 / 2$ which was used for fair-federated learning. We compare the vanilla loss versus the squared loss in Fig 4. As more target users are involved, the imbalance is worsened and the squared loss could improve the drop of vanilla losses.

In addition, the adversarial training may not only debias unwanted distribution shift but also important discriminative information, as class-wise non-iid distributions are present in federated users. The unwanted debiasing is named user collapse in the scope of this paper. We argue that using a regularization to limit the user collapse is plausible. For example, a regularization conditioned on the possible classes is helpful4. 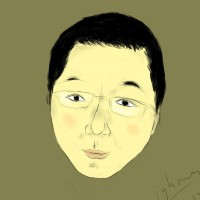